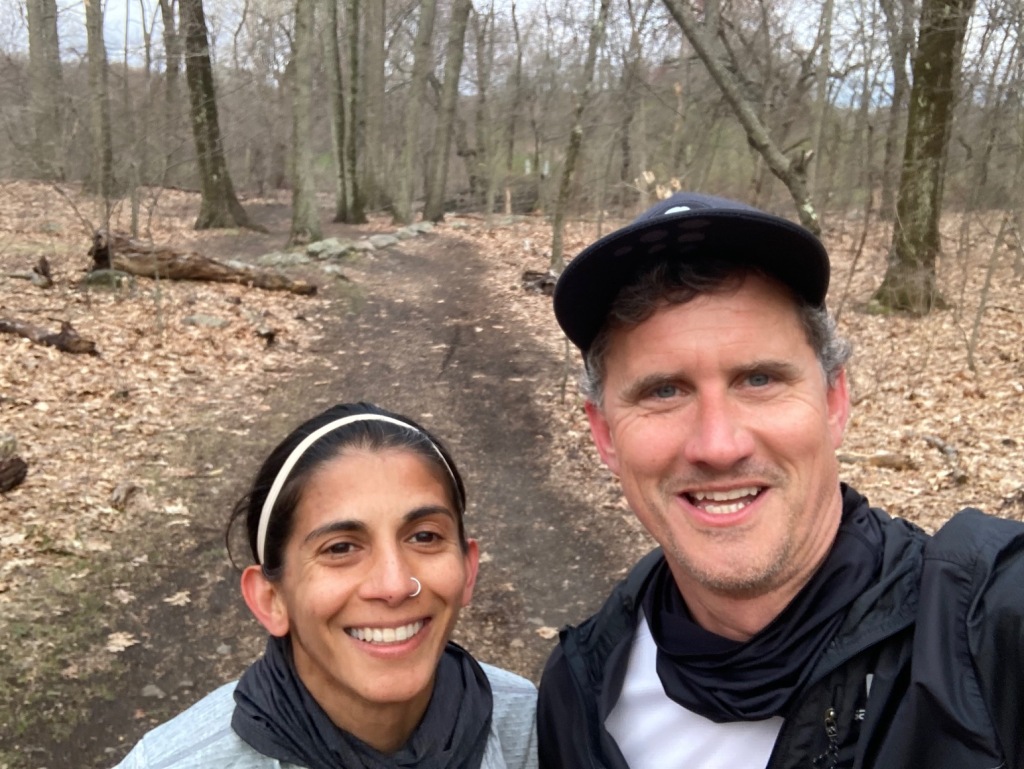 In 24 hours. In 5 mile segments. Starting every 4 hours. This was the Yeti 24-Hour Challenge. We signed up for it. It needed to be done by May 1st. It’s funny how, when you sign up for something, it’s in the future, but then eventually you have to do it. Time is never what I think it is.

We trained a fair bit, and we were ready. We planned six routes and then tried to figure a schedule. I felt strongly that I wanted to get the night segments out of the way first, so I proposed we start at 10pm on a Friday night, so we could wrap up in daylight, 6pm Saturday. I think Meghna had misgivings about this approach. I know she did. But it was the one thing I felt strongly about, so…

Leading up to our date, the weather was perfect, sometimes your best plans meet your worst weather. New England can be counted on for the most sublime weather jokes, and accordingly, on run day, we woke to heavy rain, switching over to snow and temps in the high 30s, the sort of weather that makes you shake your head in wonder.

It’s about the worst running weather possible really, cold and rainy, and I went through a wave of anxiety imagining myself stomping through inches of slush and struggling to find any sort of flow over what would be the biggest mileage day of my life. I went to Meghna’s, and we talked about postponing, even though we both knew we would go through with things exactly as planned. There is a mental and emotional arc to preparing for an event like this, an arc that resists alterations even for last minute post-winter storms.

We did adjust our route plan to avoid the marsh trail that was first on our list, opting for some pavement, just to try to mitigate possible frozen feet problems on Segment 1. Still, I was worried we were gonna suffer a lot.

Segment 1 – Cambridge/Boston Esplanade -We drove down to the river and parked and sat in the car for a minute adjusting our clothing strategies and trying to understand that this thing was about to start. I tried to make a quick video to capture our thoughts, but we were too scattered and the dome light shut off halfway through.

Down off the hill we both live on, the snow hadn’t stuck to the ground and piled up, so things were wet but not slushy. In fact, the weather that had given us pause just eight hours earlier wasn’t so bad at all once we got moving. The drizzle and mist darted through our headlamps. The city lights made things fairly cheerful, and we did what we always do, which is struggle to keep the pace down when it’s cold and we’re excited to run.

This was an out and back run. We saw maybe two other people in the 53:16 we were moving. We clocked 5.43 miles. As it turns out, neither of us were entirely sure whether the challenge was 30 miles or 50km (31.07 miles), so we figured we’d just tack a little on each run in our normal, haphazard way.

We drove home. I ate some ramen, a cookie, and drank chocolate protein shake, took a shower and climbed in bed.

Segment 2 – Arlington Reservoir to Great Meadow – When the alarm went off at 1:40am, I sprang out of bed. I had that low-level anxiety about fucking things up in the middle of the night. I’d done pretty well getting to sleep, but the alarm hurt. I spent two minutes, roughly, feeling sorry for myself, and then remembered that I promised myself not to do that. It was my choice to be there, in that moment. It was my adventure. Be fucking cheerful.

Meghna was wired when I picked her up. She hadn’t slept. She was ready to rock. We drove down the hill and ditched the car, then headed into the woods. It was still raining. It still didn’t bother us.

Unlike Segment 1, this was mostly real trail running, and it was pretty magical. We ran in our cones of light, careful with our footsteps, and again we went too fast, because it was the middle of the night, and we were still feeling fresh, and sometimes the trail just flows for you.

We ran 5.07 miles (10.5 total now) in 53:03. When I got home it was 3am. I wasn’t hungry, but I forced down a salty oat cookie, a banana, and another chocolate protein shake. I didn’t shower, just toweled off and stretched out on the couch to try and nap. That didn’t work though. The second protein shake fucked me up. I felt nauseous and sick, and so I tossed and turned on the couch until the alarm went off again at 5:40.

Segment 3 – Wester Greenway Trail (Middle Section) – Ugh. I felt pretty terrible, but what can you do? Caitlin and Chapman came out for this one, which was good. They were cheerful and distracting. Meghna seemed to feel good, and this section of trail is absolute magic. We’ve run it a thousand times, but it’s still so good.

It was on this segment, I think, that I realized how well the running was going. I was tired, and suppressing some nausea, but the physical effort of the running seemed secondary to the whole project. We were running and eating and cleaning up and trying to sleep, and then going again.

The challenge required us to start a fresh 5-miler every 4 hours. What you end up getting for rest, after you’ve run and done your best to take care of the necessities, is more like 2-and-a-half hours, so the rhythm is what’s taxing. At this stage I was thinking about a bowl of oatmeal, something basic in my guts to settle things down. And a shower. It was still raining.

Segment 4 – Fairhaven Bay – This run wasn’t on our original schedule, but it’s Meghna’s favorite spot, and we figured if we didn’t hit it for this 10am run, then we wouldn’t get there at all. Fairhaven has a rolling terrain you wouldn’t automatically choose for an ultra effort, but fuck it, what can you do? You gotta run your runs.

I was low-level annoyed that it was still raining, but I figured that was more about the lack of sleep than the precipitation. Anything can bother you when you’re tired.

Then, as it turns out, we got lost. I mean, we weren’t lost/ We know our way around Fairhaven, but there isn’t a neat 5 mile loop at Fairhaven, and the one Meghna had mapped was more confusing than our sleep-deprived minds could handle. We ended up freestyling our way to 5.0 (20.9 total) even in 50:51.

I was feeling much better by now. If there was any tricky moment along the way, this was probably it, but we’ve been running together long enough that we figured it out and got it done regardless. We ran the last bit fast, because it felt right.

A quick shower to reset, some cinnamon toast. It was around this time that I stopped really feeling hungry, and that meant that, of course, I needed to be eating and drinking. I made a thermos of sugary tea. That was a good idea.

Segment 5 – The Battle Path – 2pm. A too civilized time for a run. The Battle Path offers a smooth, flat, picturesque out-and-back. Brittney came along on this one and so did some welcome sunshine.

I felt confused by how easy the running felt, how rote. We were laughing and joking and enjoying ourselves. It could have been any Saturday. Did we nail the training? Is the format, although sleep-depriving, just a lot easier on the legs than trying to run 30 miles continuously? Not clear.

Brittney drove us home. As easy as it was to run, thinking about anything was increasingly hard. I had noticed that I was driving slowly on the way out. Everything even vaguely cerebral was slower. I’m not sure what I ate after, some potato chips, a cookie maybe.

Segment 6 – Western Greenway Rock Meadow Loop – The weather was cool and dry at 6pm. Meghna had slept hard after Segment 5 and downed a quick coffee. That left her nauseous, but we were still pretty ebullient as we wound around our home turf to finish this thing off. We ran up to the water tower, against our better judgement.

Again, the running was easy. Our legs just kept going. The trail still felt so good. I was euphoric.

I had mapped this one, and again I lost track of the exact path I had planned back to the meadow where some friends were waiting for us. Again, we ended up freestyling a little, but the running was amazing. We did the last mile at 8:20 pace, both of us just naturally speeding up, maybe to be done sooner, maybe just because we had nothing left to save energy for.

What a thing to have done. Hard but not the hardest. Inevitably I had wondered how long we could go on like this, running 5 miles every 4 hours. I’m sure we could have done more, but when is that ever not the case? All that washed away with the relief of being done, of being able to take a final, purgative shower and eat something warm and salty.

I’m reasonable sure more thinking will come out of this experience. I really just wanted to get the whole thing down in black and white as a record. Of course, as with all these sorts of things, you pay the most attention to the exploit, to the day you put it all together and did all the work and ran all the miles, but in reality, most of the adventure came before in the long runs and learning that occupied the previous weeks and months.

If you’ve been reading this blog for long, then you already most of this story without this obligatory final chapter. The whole thing, from my perspective, was satisfying. I enjoyed all the running, first step to last, and that was probably the point.