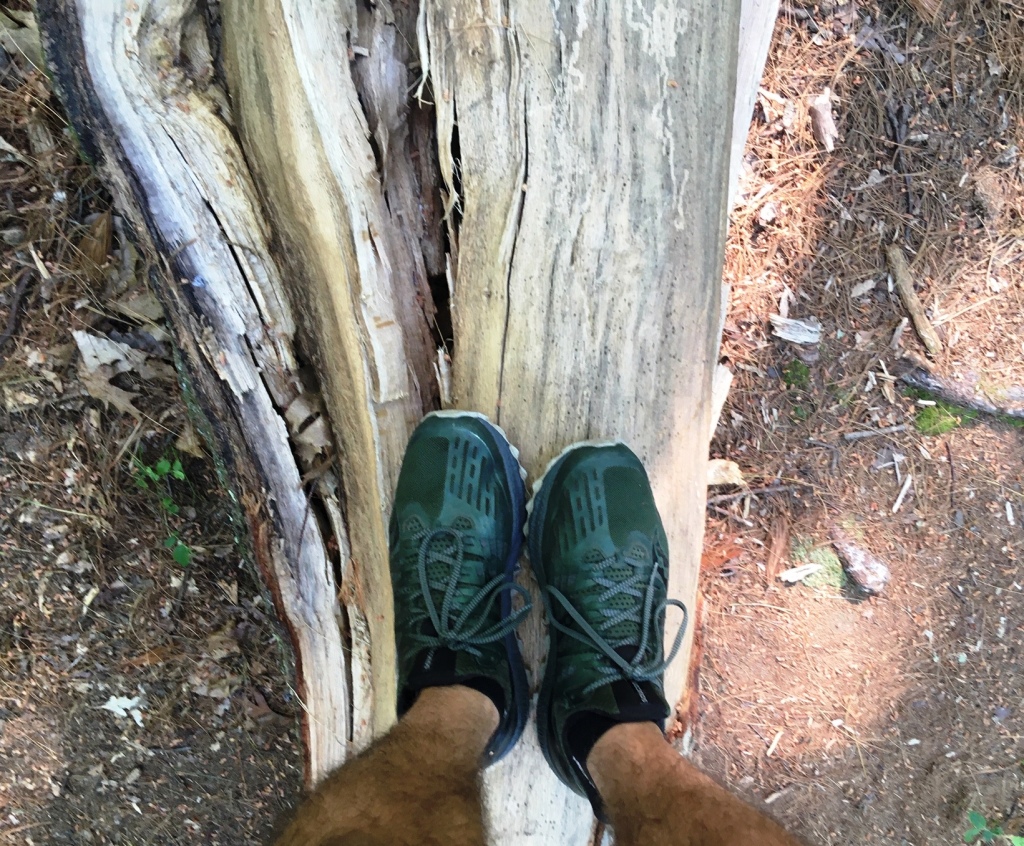 This is not a review, and it’s not a recommendation. Our feet are highly idiosyncratic, prone to injury, and covered with nerve endings. What works for me has no reason to work for you, unless you are just like me.

Don’t be just like me. I’m already doing it.

Finding the right shoes is really hard. Even the shops that let you run in a shoe before buying it don’t want to you run in the woods before buying, and that means you can test basic fit and comfort, but it’s hard to say how a shoe will feel in real terrain and over real distance.

I chase the right shoe like I chase the flow of a good run. Both are elusive, magical, and hard to hold onto. As soon as you find a shoe you love, they change it, because change drives sales. More cushioning, lighter materials, new colors. All the things we want, except also don’t change a thing.

I have had the best luck with brands that are dedicated to running specifically or keep it as their main focus. Think of Saucony, Brooks, Hoka, Salomon. There are others, but those are the brands whose shoes I’ve run in and loved.

For me, the absolutely most important factor is foot shape and stride type. My feet are narrow, my toes don’t splay, and I’m a midfoot striker. There are plenty of great shoes out there that don’t speak to those factors. Many of my good running friends like the wider toe boxes you get from Altra or Topo. I tend to prefer the narrower profiles from Saucony and Salomon.

Another factor is sole size and tread. Hoka makes nice trail running shoes, for example. I’ve really liked some of them, but they tend to make their shoes with large soles that help you feel more connection to the ground. That’s great if you’re running more buffed out trails, but here in New England you get a lot of root and rock breaking up the running surfaces, so that larger footprint isn’t as agile as I want it to be.

Tread also matters. All that root and rock requires a bit more bite than many shoes offer. I like a pretty aggressive tread on a narrower sole, so I can maintain agility,and my footing is more sure on technical climbs.

I think some of the shoe companies really come from a western states approach (not to be confused with Western States), where running trails tend to be smoother and sandier, as opposed to an eastern states approach, where things tend to be more technical. I see the same divide in mountain bike builders. Where a company comes from, i.e. where their designers run, has a big impact on the types of shoes they make, and that’s not a bad thing, but I do wish the trail type a shoe was conceived for was a bigger part of the marketing. Too often, runners are left to guess what mass-marketed shoe will work for them, in their terrain.

Once you factor in foot shape, stride type, sole size, and tread, it’s a lot to consider, and rather than feeling as though there are a million shoes on the market, you begin to think that what will actually work for you is a fairly small selection.

That’s probably ok, too, because shoes can be a distraction (trust me).

I want to put out there, also, that the big companies like Nike, Adidas, New Balance, et. al. do make some good running shoes, but I prefer to support the companies that are focusing their energy on our sport rather than simply trying to profit in another marketspace. New Balance is probably the exception to that general rule in as much as they are a running brand first.

As I said at the top, I’m not here to advocate for specific shoes. I am, though, here to advocate for going to a store and trying on as many shoes as you can. Web shopping will inundate you with information, some of it accurate, some of it so bland and overgeneralized as to be useless. It’s nice to see the shoe, and no matter how many times someone says, “how it fits is the most important thing,” you have to like how the shoe looks too. That’s not a shallow consideration. We run better in shoes we feel we look good in, and we run more in them. Having said that, there is just no way to see a shoe online, even a shoe you’ve owned previously, and know how it’s going to feel on your foot, and there is no greater arbiter of your running experience than your shoes feeling right.

There are some good and useful running shoe reviews online. I like Ginger Runner particularly, because he gives a shoe’s negatives in every analysis, and he puts in real miles before he tells you what he thinks. Still, there is no substitute for putting the shoes on your own feet. I have loved shoes he’s rated poorly. That’s the just nature of an activity as universal, and yet so individual, as running.

One final idea. I don’t hunt for bargains on shoes. I look for the best shoe for me and how I run, and I don’t mind paying for that. When you buy early season shoes, when they first come out, you then have a chance to figure out what you like best, AND THEN buy another pair at the end of the season, when all the running stores are clearing out inventory. It’s not crazy to buy several pairs at that point, if a shoe really works for you.