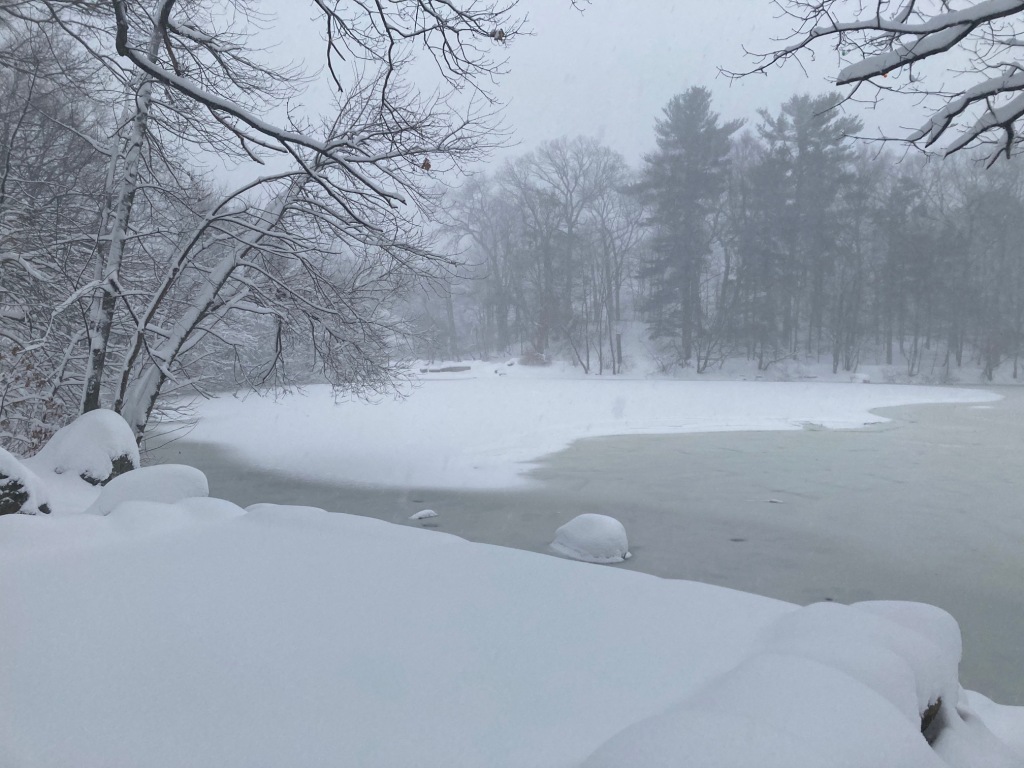 I woke up before the alarm, as I mostly do these days, and wondered how much snow had fallen in the night. The ground was dry when I went to bed, but by the time I dragged myself downstairs to push the button on the coffee maker there was something close to a foot collected on the front steps and out in the street.

We, the wife and I, had agreed to accompany Caitlin on a 5k circuit at dawn, part of the Yeti Trail Runners‘ Twelve Days of Xmas challenge. I sipped my coffee and wondered whether I should strap on snow shoes or resign myself to post-holing the whole thing. I have never snow-shoed from my front door. The idea seemed ludicrous.

So we geared up and set off, and if it wasn’t for the wind-driven snow stinging the side of my face as we crossed the park to meet Caitlin and Meghna too, then I would have second-guessed leaving those snow shoes at home. Django looked to be swimming in the deep powder, his tail sawing back and forth, ice building up on his nose. Dogs are funny in the snow.

Very few people stir this early on a storm day, so we walked in the road to take advantage of the early plows’ work, flakes slewing through the cones of street light.

Caitlin was on a schedule. The challenge told her she needed to complete this 5k faster than the same route and distance on Monday, the difference being that it was 45F and dry on Monday. She let us know right away she didn’t expect to beat that time, but we pushed on as best we could, kicking our boots into the depressions from Meghna and Caitlin’s show shoes. I was sweating, and my calves were beginning to cramp from the effort of pushing all that snow.

In my mind, this is preparation for walking up ski hills on Dawn Patrol, and the surreality of it matched those adventures, the group of us plodding through the woods in the still dark pretending we know a secret no one else knows.

I’m struggling to get out the door just lately. Caitlin drove the Motivation Train this morning.

I’ve been dreaming of the winter and this snow for a long time, but somehow I also wasn’t ready and I’ve needed friends to get me going. I’m hoping, if I just get some on me, force myself out into a heavy, driving snow, feel the heat build in my limbs and chest, see how beautiful everything is outlined in white, that I can get back on track.