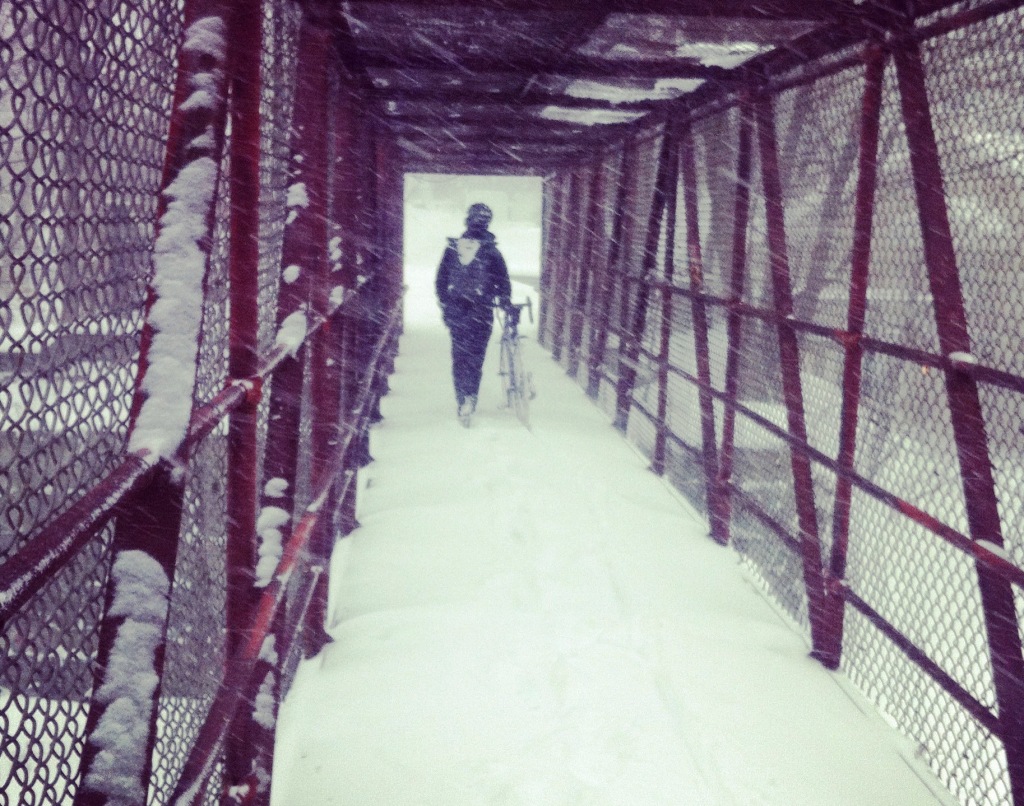 Another from The Cycling Independent…

Winter is like a spin-off from your favorite TV series. It shares some characters and themes with the original, but it’s not the same, and frankly, you’re not sure you like it. You’re certainly not convinced you want to plow a lot of time and money into it.

Maybe I can help you decide.

If you live in a place that gets snow and ice, you either ride in it or you don’t. Either you put the bike away, put on some weight, rest up and then start over again in the spring. Or you layer up, maybe mount some studded tires, and stay after it year-round. I think both options are fraught with some peril, but more on that anon.

Let me start by saying I am riding less the last few winters than I have historically. I’m working exclusively at home now, so there’s no commute, and honestly, I think once you’re out of the groove of heading out into the conditions every day, it makes it harder to get out for the occasional adventure. Newton wrote all of this down in his Laws of Motion.

Anyway, with my disclaimers out of the way, let’s get to it.

I spent a bunch of years doing the thing, and so first I want to describe what the thing is, because if you don’t live in a winter place then you might think winter riding is about riding in the snow. The snow, however, is mostly a secondary concern. You can ride on a lot of snow, unless it’s too deep, and once it’s too deep, there’s really no riding on it, even with a fat bike. Every fat biker I know has discovered this to their dismay.

Having said that, I have had some of the best rides of my life on tacky inch deep snow, in bright, blazing winter sunshine. This sort of thing is like an eclipse or an honest politician though, rare.

The main thing about riding in the winter is ice, and the real mechanism of difficulty is the thaw/freeze cycle in which whatever water is on the ground melts and freezes again in the seesaw of daytime/nightime temperatures. A good set of studded tires will manage most ice conditions, although rutted ice, like you get when people ride through slush during the day, which then freezes, is a real problem.

And the thing to know about riding on studded tires is that it’s not awesome. They’re really heavy and stiff. You are rolling.  You are riding your bike, but your rolling momentum is drastically reduced, and that changes the game. So, if you’re thrilled by just being out, either on the road or in the woods, studded tires are the way to get there, and if you can be happy just being out, then you’re golden, but the situation is pretty low flow.

Another huge challenge for winter riding is space. Once a lot of snow piles up, the traffic and parking lanes shrink, and there’s just not a lot of room to exist on the road. That, for me, has always been the biggest impediment to winter riding, that feeling like you’re in the way all the time and you’re sort of dodging between snow piles to get anywhere. The cars, which already have a sort of intolerant, even predatory, feel to them, take on an air of outright irritation. You’re in their way. I don’t blame them.

The last thing, or maybe the first really, to consider is clothing. You have to layer. You already know that. But the kinds of layers you choose is important too. I like to start with a long sleeve base layer, preferably a breathable one made of wool or loose weave polyester. Putting something too moisture/wind proof too close to your skin will create the conditions for a personal steam bath, which then becomes a hypothermia trap.

I like the second layer to be wool too. Because I run warm, in most conditions, even quite cold, I know I’m going to ride myself warm, and it’s very likely I will end up with just the two layers on, or those two plus a thin wind jacket. Breathability, as ever, is key.

Here’s where things gain some nuance. The third layer choice has a bit of a flow-chart decision making progress behind it. Is it not too cold? Is this going to be the top layer? If so, then this is a wind breaking or proof layer. If this is not the top layer, for example when it’s very cold (below 25F for me), then maybe it’s a fleecy vest or a thin insulated jacket, which then gets the wind resistant layer on top.

The wind layer both keeps you warm, by preventing the breeze from stealing your body heat, but it also protects you against icy, salty, muddy splatter. It’s a lot easier to clean a wind layer than a wool layer. Write that down.

Hands and feet are a whole challenge unto themselves. Feet are most important, I think. Under 30F, I wear a pair of Gore-Tex boots that protect my foot and cover my ankle, overlapping with my tights (wind front). Above 30F, I try to get by with wool socks and maybe some toe covers. I’m not a fan of full shoe covers. They seldom fit well, for me, and the boots available today make them more or less redundant.

I do have two options for those Gore-Tex boots, one light and fairly agile, and the other much heavier and as a result not conducive with jumps out of the saddle to close gaps or attack climbs (if either of those is your thing).

I have written about gloves recently, and I think this is really the hardest problem to solve. For the coldest days, people swear by Bar Mitts, but I’m not one of those people. I’m not saying they’re wrong. I’m just saying I don’t like them. I prefer to mix and match my gloves as needed. In cool temps, I wear thin liners, with a conventional, light, full-fingered trail glove over them (or a pair of Craft Hybrid Weather glove/mittens, see review linked above). If it gets colder, I move to the Craft Siberians. If it gets super cold, I have a pair of 45North Sturmfist 4 lobster mitts. My current pair fell prey to the sharp part of a chain link fence, though. They’re not fence proof, FWIW.

Finally, finally, there’s laundry. You’re going to do a hell of a lot more of it in winter. This can get exhausting, just as planning and pulling all these layers on gets to be a bit much. One of the reasons I like wool so much is that it doesn’t always need to be washed, like Lycra does.

Alright, that’s a lot of information, and if you’re not a four-season cyclist, you might read it and think, “Well, that’s not for me.” I get that. What I would encourage you to do is to push your limits a little, and maybe change the way you think about riding in the winter. It’s a good season to slow down, break your routines, just enjoy being outside, and to build back your base fitness. You don’t have to commit to frigid temps to get something good out of expanding your season.