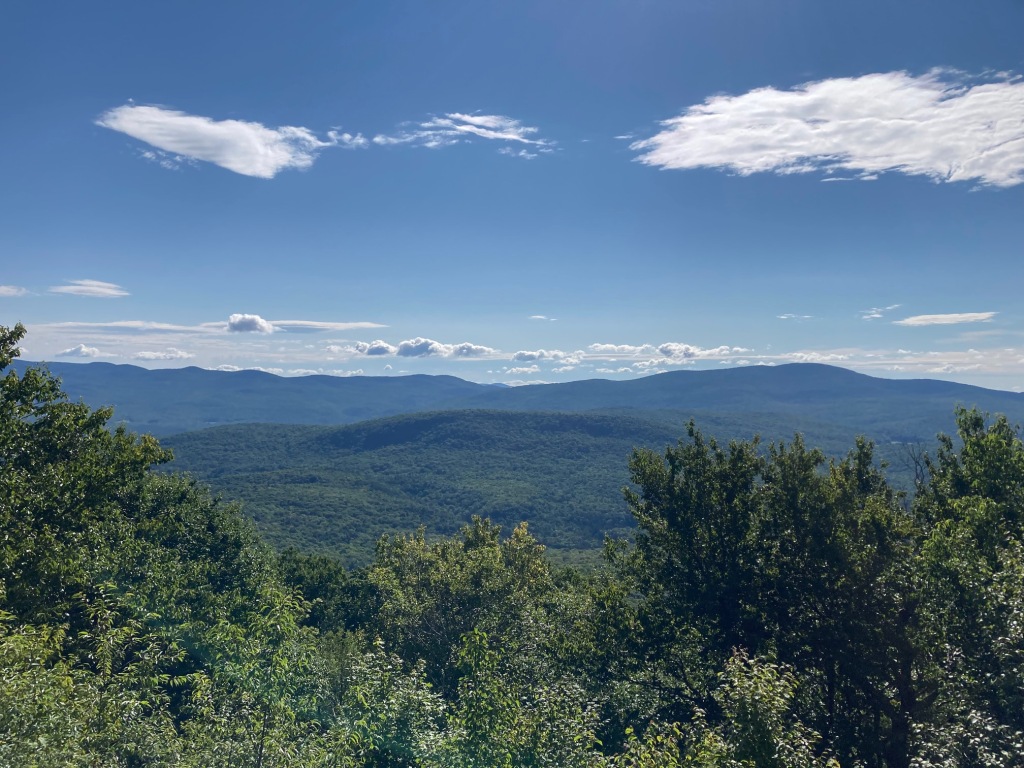 I just don’t know what to say. We ran a 14 mile trail race in Vermont, and the weather was perfect, and it all went pretty well, but I’m at a loss for words.

I can tell you this. The spine of the State of Vermont is the Green Mountains, and anywhere those mountains heave up toward the sky is a good place to be. When we woke Saturday morning the temperature was 49F with a gentle breeze and ardent sunshine.

As for the running part, let me try to be simple.

I was happy not to fall apart. I was happy not to die. I was happy to make it to the finish. For all the pre-race anxiety I felt, the main thing was not to find myself back in the hurt locker, at least not in an unmanageable way. I’ve never had doubts about my physical health weigh so heavily on me before, and it would be easy to say that I vanquished those doubts by running strong through the climbs and on the technical descents, but it’s not that straightforward.

Maybe it’s just that a long, technical trail race is difficult. Simple as that. You are supposed to be uncomfortable. And now, because I have these doubts, I don’t know how to properly interpret the signs of discomfort coming into my brain. This is what’s called, colloquially, being a ‘head case.’

Despite that, I crushed the first climb. It feels braggy to put it that way, but relative to my expectations it’s true. I crushed it. I dropped a lot of folks on the way up, and while that wasn’t my aim or intention, it was a confidence builder. If the race had finished at its high point, I would thought, “I’M BACK!!!”

Even the ensuing descent went pretty well. It was a wet, rocky, careening plummet off the top of the mountain, and we managed to stay upright and move quickly. An older gentleman we were clustered with on the way down did eat absolute shit, slipping on a broad, wet stone, losing both feet and bouncing off it fully prone. We got him up and scraped the mud off, and he said he was ok, so off we went again.

It was down the bottom that the reckoning came, as it always does. We’d been flying, and it was time to see what it had cost.

We (I) did not crush the second half of the race. We became much more judicious about when to run and when to hike. The late race climbs weren’t as steep as the opening monster, but it didn’t matter. We didn’t have the gas. We kept moving as best we could. Ran when running made sense, and finished, well cooked.

As usual, even on a cool day, I sweated out. As a precaution this time, I brought salt tabs with me and hit three of them around the midpoint. Would things have been much harder without them? Maybe.

So, did I put some doubts to rest with this run? A few. Rather than saying I’m fully recovered, no problems, nothing to see here, I’d say I managed this effort better than I’ve managed others. I ate and drank better. I added salt to the mix. But, the man with the hammer is still out there, and he’ll take a whack at me anytime he feels like. The summer is not my strong suit, and I’m inclined to proceed carefully still, rather than with my usual few-fucks attitude.