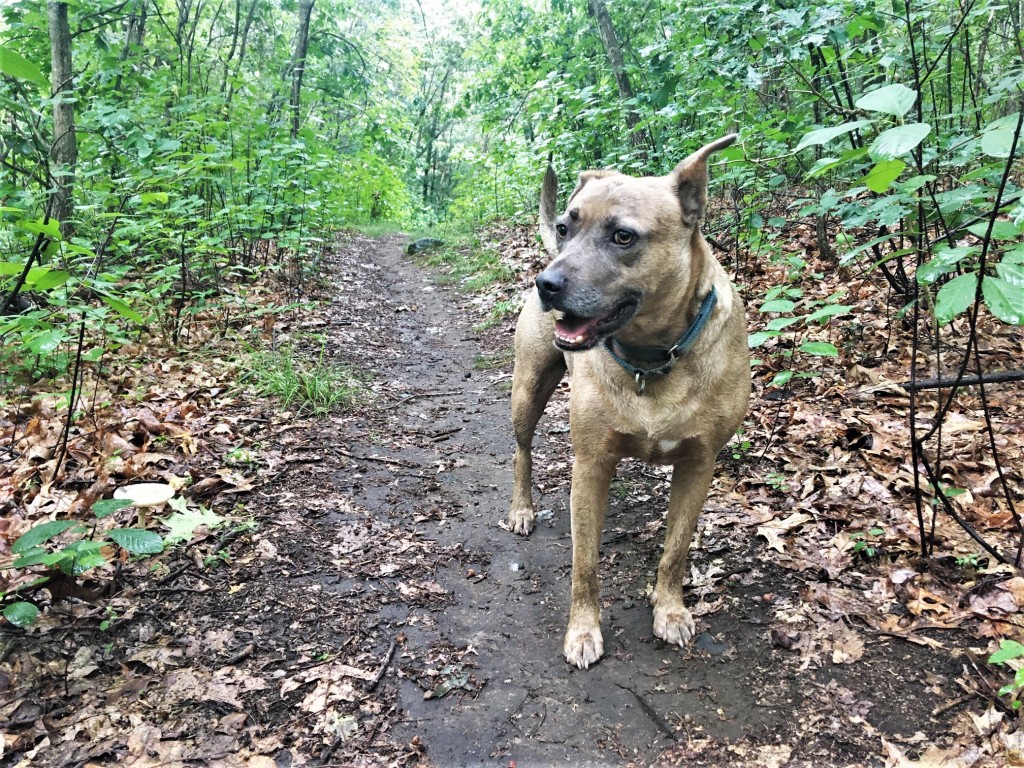 He’s a good trail dog, Django, but sometimes he can’t decide whether he wants to run ahead or behind. He had just darted in front of me, maybe with the scent of chipmunk in his nose, when all of a sudden he pulled up short, sideways in the trail, forcing me to dodge to keep from tripping over him.

When I try to correct Django’s behavior, M always tells me to lay off him. He’ll bump her sometimes, and I’ll say something to him. This is just training in my eyes, but M will say, “No. He’s fine.”

The other day I said, “I love him dearly, but he doesn’t understand pace at all,” and M said, “We don’t either.” Like most simple, true statements, this one dawned on me slowly.

Django seems to have a few different motivations on the trail. First and foremost is the pack. At some point he establishes how many of us there are, and he dedicates himself to both staying with us and keeping us all together. If someone stops to tie their shoe or take a picture or pee behind a tree, Django slows up and waits for them, refusing to move forward until they’re back. It’s endearing, but it can also make forays to the woods more complicated when members of the pack are actually intending to do different things at different speeds.

If the pack is number one, he is easily distracted by that primary purpose by the appearance of small, furry things, chipmunks, squirrels, rabbits. Rabbits, above all else, trigger something in his DNA that overrides all other considerations. He has never once caught a critter on one of our runs, but he has also never stopped trying. There is another lesson there probably.

Describing the way Django thinks about our time on the trail makes it seem like his ideas only superficially overlap with ours, and that his lack of consistent pacing is no surprise.

But we’re not so different, despite believing we’re smooth, steady, and in control.

I have one basic reaction to how I feel on the trail, and that’s to speed up. If I’m not feeling well, I speed up. I must just need to burn off the first layer of hurt, right? If I’m feeling good, I speed up, because if it feels good now, going faster can only feel better, right? If I come to a climb, I speed up, because hills hurt, and I want them over faster. If I come to a descent, well, that’s free speed, so let gravity do its thing.

The result is a pace no better than Django’s without the excuse of having a brain hardwired to chase prey. Also, Django will more or less never stop, whereas I, having made a lot of poor decisions about when to speed up and when to slow down, am always thinking of stopping.